You might have photos in a folder other than “My Pictures” or on a drive other that “C:”. Those photos will not be displayed in the Photos tile on the start screen and will not shown in Photo Gallery. Rather than moving the photos or their folder around on your PC, the proper way is to include the folder containing those pictures in you Pictures library. Here is the procedure for doing that:

That’s it. You have now included the folder in the Pictures library. Yes, you can include a whole drive. You will get the same menu when you right-click a drive name.

Your photos from the included folders will show up in all programs and apps that use the library, like Windows Photo Gallery, Picasa, of course, File Explorer. They will also be displayed in the Start page Photos app.

Sure can! There are numerous downloads available to put a start button on your Windows 8 desktop. Some for free, some at a modest price. All are trying to fill the void that Microsoft has created by leaving the start button out of Windows 8.

Over at This ‘n That, I offered a quick solution to help out until Microsoft puts a real one back on Windows 8. There are rumors to the effect, that come Fall, the Windows 8.1 update will once again feature a start button.

Take a couple of minutes and read my post Make your own Windows 8 start button and a couple more to a reasonably good substitute on your Windows 8 taskbar.

Windows 8 offers easy options to place a tile on the Start screen, “Pin to Start”, and to put an icon on the desktop taskbar, “Pin to taskbar”, but the method to create a desktop shortcut is not obvious at all. Here is how you can quickly put a shortcut icon on your Windows 8 desktop for any installed desktop program. This does not work for the Windows 8 style apps that only run in the non-desktop environment.

Press the Windows logo key to open the Start screen. Right-click on an empty space and click All apps in the bar at the bottom.

Find the program – you may have to scroll – and right-click its tile.

Now you get the options on the bottom for a number of tasks. Click Open file location (see the red arrows in the illustration).

This switches you to the desktop and opens File Explorer. The shortcut location for the program will already be selected. Right-click on the program name, move the pointer down to Send to then horizontally over to the sub-menu and down to Desktop (create shortcut). Click that.

That’s it. You will now have a desktop shortcut for that program on the desktop. You can position it as you like. The shortcut works as expected, double-click it to open the program. 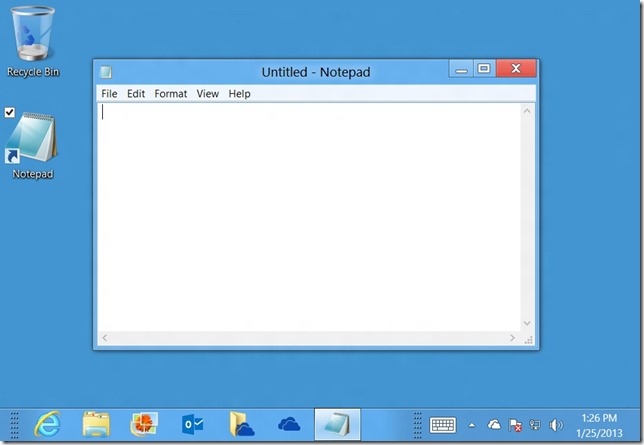 SkyDrive has been thoroughly integrated into the fabric of Windows 8. The SkyDrive desktop app brings access to SkyDrive right into File Explorer – Windows Explorer of prior Windows editions. An earlier post, from before Windows 8 was released, shows a method for providing access to multiple SkyDrive accounts (Can I install multiple SkyDrive apps on my desktop?). That method works just fine in Windows 8. This article expands on that and provides some additional information.

Only one instance of the actual SkyDrive desktop app can be installed, however, shortcuts to SkyDrive folders of other users of the PC can be placed on the desktop. The illustration here shows access to three SkyDrive folders simultaneously. 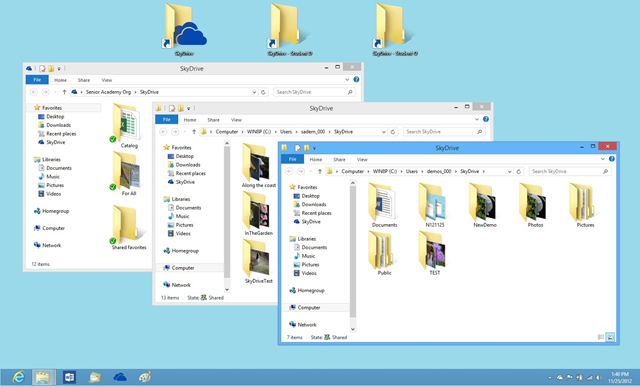 First a review on setting up the PC.

You may have to give permission to proceed during these steps.

All normal tasks can be done in these folders – copy, move, delete, paste – just as in any other folder. The difference is that any changes in these SkyDrive folders will be synced with the SkyDrive in the cloud and the SkyDrive folders on other PCs, smartphones, etc. Of course, you need to be connected to the Internet for synchronization to take place. If you are not connected to the Internet, you can still make any changes like any other folders in File Explorer. When a connection is restored, the syncing will take place in the background.

There are some limitations with this arrangement. You can see the sync status symbols only on the local SkyDrive folder (the check mark indicates that the item is up to date). There is no indication that another user is signed out and thus the changes will not be synchronized.

You cannot make changes to which folders should be included in the local SkyDrive folder. Such changes have to be made on the respective user’s desktop.

You cannot initiate sharing in the folders for the other users, you can do this only in the primary SkyDrive folder.

When rebooting the PC you need to sign in each user.

These are relatively minor inconveniences compared to the ability to easily access several SkyDrive folders on the same desktop.